Some members of the community together with the Imaam of the Rainbow Masjid, Moulana Nazir Ahmed Jassat felt a need to do something for the Ummah after hearing a talk by Moulana Khalid and Moulana Haider on Bread/Slice for Life.

This urged and motivated those concerned members and after some deliberations that led to the eventual launch of the Rainbow Masjid Social Committee (RMSC). It was on 24 Shabaan 1435/ 25 June 2014 at the Rainbow Masjid after the Esha Salaat (8.00pm) that the RMSC was born.

After a lengthy discussion on various options and activities we finally decided that ‘Charity Begins at Home’. That is when we decided that since the month of Ramadaan was approaching we would make our FIRST project an Eid gift for the destitute within our community.And since collecting Lillah would be the best option we got the project underway and informed the congregation about it.

To our amazement and the mercy of Allah our community dug deep into their pockets and filled our coffers for an exceptional amount of R28 000.00 which assisted about 28 families. Our initial list had 13 families but increased afterwards in number as the community opened their hearts as well.

Before Eid the committee got the Eid Gift campaign started and distributed all the funds, no amounts were kept back for any administration or any other costs.

Also the committee received positive feedback, even some were in tears when this gift was presented to them. Al Hamdo Lillah the project was a tremendous success.

No sooner was the project done, the RMSC took on the task of the Bread and Milk scheme whereby today five families are supplied for on a daily basis. We also have a Mayyat service within our boundries whereby we offer, FREE Of CHARGE the following at the Mayyat House: Tables, Chairs,Blankets, Quraans, Tasbees, Cutlery and Utensils. 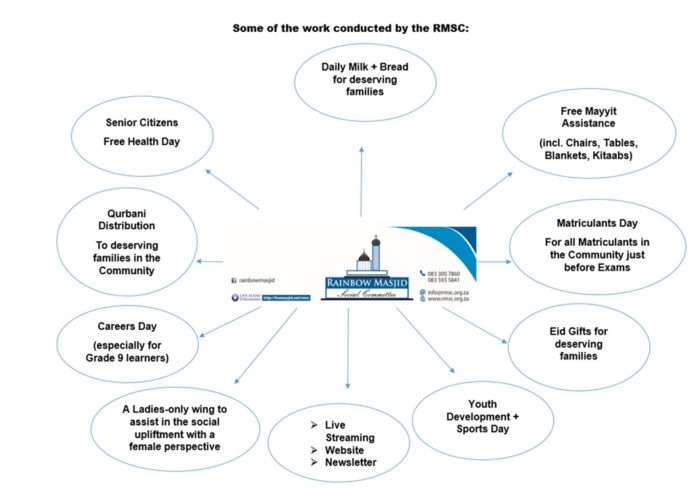